I had already decided I was going to stand by her through this. The only option I had was to make sure she lived the rest of her life as a happy woman. Anger, pain and stress wouldn’t do her any good now.

I got up from my seat and ran towards her.

I said: “If I can’t keep you alive, at least believe in miracles. Miracles do happen if you have faith.” I said.

“Ben, I’m a Christian and I always will be. However, we sometimes we should just let God take control of everything. If it’s my time, let it be. If it’s not, then we can hope for a miracle, it’s all up to God.” She said.

Amina was a weird Christian, I thought to myself. She didn’t want to be consoled. I found sense in what she was saying but her perception of the ways of God was just beyond my understanding.

As we stood there talking, I saw a car that looked like Roland’s. It came right at us and parked. Well, I was right, it was him. What surprised was Paula, who was seated in car with him.

That broke me down indeed, but I quickly thought: hey, we all have limited time on earth so I will just stand by her.

“Amina, that is life for you. We live, we die, we make babies. Come on, we can work this out, trust me” I said.

She shook her head and smiled at me

“You really don’t get it, do you? My time on earth is limited Ben, just a month limited, 30 days to be precise and that is on condition if I only don’t stress myself.” She said.

That was when I realized the reality of what she saying and the condition she was in. Amina was sick and was dying slowly.

Every minute for her was a countdown to death. Imagine how you’d feel if you knew your own time of death and there’s absolutely nothing you can do about it?

When she gave me the news, I couldn’t say anything any longer.

She just sat there looking me in the eye with tears coming down from hers. She smiled while talking to me. It was as if she had accepted her fate and was ready for what was coming. It caught me like a news flash. I mean, how could such an adorable person like Amina be dealing with a life-threatening condition?

This world indeed is not fair. Those who don’t deserve to die are the ones dying every day while murderers and high profile criminals continue walking around the streets, endangering people’s life. But who am I to judge, who am I to determine who lives and who dies? But I can’t just accept the death sentence with Amina. There must be a way out of it. There has to be a way!

As if she knew what I was thinking, she took my hand and rubbed her soft warm fingers over it.

“There is nothing anyone can do Ben, I am a doctor and I know what I’m talking about. I have accepted it.  We are all going to die someday anyway, so if my own time is here, I just have to embrace it.“ She said.

I couldn’t believe she was actually saying that. This was one moment when I wanted everything to be a dream. I wanted to wake up from this nightmare. I can’t bear to lose her. No. I can’t. I love her.

“Amina, I thought this was only reserved for the movies but I mean it when I say I am going to keep you alive…” I said.

She started laughing at me, as if I had no idea what I was talking about. “keep her alive” really? Did I really say that? That just shows how confused and frustrated as I was. I didn’t even know what I was saying.

When she was done laughing at me, she stood up, picked her bag and said goodbye. And just like that, she began to walk away. It was that moment I noticed why she was always careful with her steps. Back at the hospital, I always starred at her when she walked. She walked slowly all the time. Now I understood, she was being careful. She was trying to avoid getting stressed up. That was definitely not good for her health.

I have to figure out a way to help her.

I watched her closely and was totally speechless. She was actually two months pregnant for Roland. Well, I told myself not to bother too much. If she loved him, she should pray that he’d become a better husband and a good father.

I didn’t talk until we got home. I met my father there and I opened up to him for the first time.  We spoke for long while, until he got called for a business meeting.

Sheila showed me my room. I took a quick shower and threw myself on the bed, lost in thought. I was thinking about the love of my life, Amina.

I needed to see her again. I needed to be with her. For now, I felt fulfilled just thinking about her.  However, I was still worried about what she was keeping from me.

Later that evening, I got a call on my phone from an unknown number. I was so happy to hear that voice, It was her, my Amina. She went straight to the point.

She quickly stood up from her chair and ran towards me. The next thing I knew was our lips clinging together in this passionate kiss.

Everything from that moment changed. That was when I learnt the true definition of love.

I felt every movement of her tongue and lips when she kissed me. And for a while, I felt this will never end. She pulled away all of a sudden. We stood and there starring at each other trying to figure out what had just happened.

But I was wondering if she did that out of love or something else. I needed to be sure what it was. I needed her to tell me what exactly she felt for me.

Well, the kiss was good and I really enjoyed it but it did not justify anything. I needed to hear it from her. So I broke the ice

“Amina, do you love me as much as I do you? I need to hear this from you. Please tell me.” I asked her desperately.

“What is making it difficult? You being honest with yourself and telling me what you feel or you complicating this whole issue by keeping it yourself?” I said.

Now I was beginning to think that my sister Sheila was really good at interrupting conversations. She came into the office just then and everything that was brewing between Amina and I disappeared.

It was obvious I had to leave with Sheila. Apparently that was why she came to the hospital that day.  I said goodbye to Amina and went to meet Sheila. But this was not over, I was going to come back and put things right.

I love her and she knows that, whatever is holding her back is what I intend to find out.

Without saying a word to Sheila, we both walked to her car and drove off. Just as I decided to ask her about Roland and Paula, she gave me news that gave me the shock of my life.

“Ben, there is something I need to tell you.” She said.

I nodded and then she continued.

“I’m pregnant for Roland.” She said.

It was like a bee stung me. I watched her and realized that she needed more help than me. What I went through in life, even before I got to know her as my sister was just a tip of the ice berg compared to her experience.

“Hey Dear, I….” I said then she quickly interrupted.

“Meet me at Daizy’s restaurant within the next 15 mins. I’m waiting” She said and hung up.

Daizy’s restaurant was just a few kilometers from my father’s house where I was. Without telling anyone anything, I quickly left the house, without anyone noticing too.

Soon I arrived the venue. I saw her seated at a lonely corner. I joined her and as soon as I sat, I realized that she had been crying.

“Amina, what’s wrong with you? I asked.

“Ben, there is something you need to know about me.” She said.

“I’m all ears dear, tell me. I will be there to support you any way you need me to” I said but she shushed me. I was talking too much.

“Ben, you asked me if I loved you. Well, it’s not something I planned but I do love you Ben. However, I hate that I do. My love for you won’t do you any good, it will rather hurt you and break you down.” She said.

I didn’t understand what she was saying. How can her love break me down?

“Amina, love mends all things. Yu just let me into your life and we can figure this out together.” I said.

“You don’t understand my dear, I am a doctor and my duty is to save lives yet ……” she stopped and began crying again.

“Yet what, Amina, what are you not telling me?” I desperately asked.

“Ben, I’m sick, I have a heart condition and my time on earth is limited.” She said.

She looked at me and to my surprise, tears began to fall from her eyes.

Is she such a baby, to cry over this? I went towards her and wiped off her tears with my handkerchief. There it was, right there in her eyes. I saw that she was hiding something from me. This was beyond what she actually felt from me; there was something else. Something that was hurting her within. She was not ready to open to me and tell me what it was that she was hiding.

Roland rolled down the glass of his vehicle and spoke to us. “Ben, I see you are doing fine with this doctor. Amina, how are you anyway?”

Amina was getting upset. You could tell that Roland’s presence was getting her worked up, I could see she was panting. I tried getting her away from the scene but Roland kept ranting and it was as if he knew Amina’s condition. “You know you are not supposed to get angry baby girl. It is really not good for your health, you know.”

This was getting too much. I still didn’t know what relationship existed between Roland and Amina but I needed to get her away from him before anything nasty happened. She was getting more furious by the minute and her panting was very visible. She was really angry. 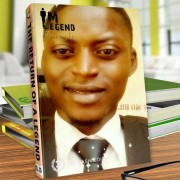